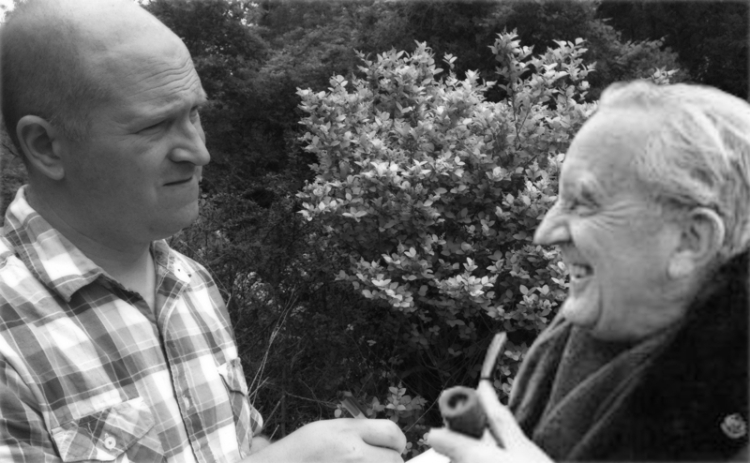 I have long been a fan of J.R.R. Tolkien.  Every year, when school dismisses for summer break, I read The Lord of the Rings.  This year I will read it to my children and do all the voices for them.  Tolkien was a brilliant writer, but what if we could sit down with him and ask him any question we wanted?  What if he could give writers advice about their own writing from his years of experience as an incredible storyteller?

This is possible if we read his letters.  I have a musty old book entitled The Letters of J.R.R. Tolkien, edited by Humphrey Carpenter.  I once spent the better part of a month reading it cover to cover and underlining every instance where the master of Middle Earth wrote about his process.  What follows are the best of those notes:

1.  Vanity Is Useless – Tolkien writes in a letter to Sir Stanley Unwin on 31 July 1947 “…I certainly hope to leave behind me the whole thing [LOTR] revised and in final form, for the world to throw into the waste-paper basket.  All books come there in the end, in this world, anyway” (121).  The Lord of the Rings has a worldwide following, has inspired films, video games, animated features, songs, poetry, fan fiction and countless other things, yet its author felt that in reality it may not be that important to the world.  There are several other instances where he writes to people about how humble he feels about the things he writes and that they are not really life changing at all, but simply imaginings “from my head”.  In Tolkien’s opinion, The Hobbit was published out of sheer “accident”, as he had passed it around to a few close friends, one of them being C.S. Lewis.  Finally (and lucky for us) an Oxford graduate, Susan Dagnall, who worked for the London publishing house of Allen & Unwin, encouraged him to submit it for publication.  He did, and there are pages of letters where he struggles with the process of publication.  He was not, in any way, a vain man, especially about his writing.

2.  Keep a Stiff Upper Lip – In another letter to Sir Stanley Unwin dated July 21, 1946, Tolkien lists a mound of personal struggles he was facing: being ill, being overworked and missing his son Christopher who was away in the Royal Navy.  He put many of his struggles aside, though, and went to writing.  He had to balance his day job with his desire to write epic stories set in Middle Earth.  He found time.  He made time.  It took him 7 years to write The Hobbit. (117) The thing that he writes about most in this period is his struggle to get the work finished on his novels and to balance teaching and his many duties at Oxford College.  Apparently he found a way.

3. Listen to Critics – Tolkien writes to his editor about the comments C.S. Lewis made about The Lord of the Rings: “When he would say, ‘You can do better than that.  Better, Tolkien, please!’  I would try.  I’d sit down and write the section over and over.  That happened with the scene I think is the best in the book, the confrontation between Gandalf and his rival wizard, Saruman, in the ravaged city of Isengard.”  He writes that he “cut out some passages of light-hearted hobbit conversation which he [Lewis] found tiresome, thinking that if he did most other readers (if any) would feel the same…to tell the truth he never really like hobbits very much, least of all Merry and Pippin.  But a great number of readers do, and would like more than they have got” (376).  I notice the words in parenthesis “if any”, because there are many passages in the letters where Tolkien seems to be self-deprecating.  He listened carefully to critics and understood that they would hone his writing down to something that would be well received by many.  We must learn to use the advice of critics to help us become better writers.

Probably the most telling letter of the entire collection would be his letter to Christopher Bretherton dated July 16th, 1964.  The following are the highlights of that text:

4.  Let Your Interests Drive Your Writing – Tolkien wrote: “I began the construction of languages in early boyhood: I am primarily a scientific philologist.  My interests were, and remain, largely scientific.  But I was also interest in traditional tales (especially those concerning dragons); and writing (not reading) verse and metrical devices.  These things began to flow together when I was an undergraduate to the despair of my tutors and near-wrecking of my career” (345).  Tolkien’s interest was originally languages.  He loved to create his own languages based on more ancient ones of which he was intimately familiar.  He followed his interests enough to create entire cultures based on these languages and then wrote stories about them which then became legend.  He wrote about what interested him most.  If you are writing something that is not really in your heart, you will write something flat and lifeless.  Let the words of your text pour directly from your personal interests.

5.  Poetry As A Road to Prose – When Tolkien couldn’t express his thoughts in prose he “wrote much of it in verse.”  He writes “The first version of the song of Strider concerning Luthien,… originally appeared in the Leeds University magazine, but the whole tale, as sketched by Aragorn, was written in a poem of great length” (346).  If you cannot write the prose in a convincing manner, try composing your thoughts in the form of verse.  It will cause your brain to think deeply about the phrasing, the structure and the literary devices needed to excel in writing prose.  Possibly this is why much of Tolkien’s writing reads in the form of a cadence.  I have personally practiced this technique and it makes a profound difference in the quality of my prose once it finally makes it to the page.

6.  Happy Accidents –  Tolkien writes: “The Hobbit saw the light and made my connection with A. & U. by an accident.”  Further: “From The Hobbit are also derived the matter of the Dwarves, Durin their prime ancestor, and Moria; and Elrond.  The passage in chapter 3 (LOTR) relating him to the Half-elven of the mythology was a fortunate accident, due to the difficulty of constantly inventing good names for new characters” (346).  Sometimes accidents happen, and sometimes those accidents will lead a writer to a publisher or create an entire novel.  Tolkien created entire worlds and then used what he knew of myth and legend to tell iconic, archetypal stories based in those magical places.  Even though he planned everything out meticulously, he still had happy accidents occur that he kept in the final manuscript because they just worked.  Sometimes accidents can be blessings.

7.  Dreams Give Us Inspiration – He writes: “In sleep I had the dreadful dream of the ineluctable Wave, either coming out of the quiet sea, or coming in towering over the green inlands.  It still occurs occasionally, though now exorcised by writing about it.  It always ends by surrender, and I awake gasping out of the deep water.  I used to draw it or write bad poems about it.  When C.S. Lewis and I tossed up, and he was to write on space-travel and I on time-travel, I began an abortive book of time-travel of which the end was to be the presence of my hero in the drowning of Atlantis”(347).  He goes on to write of the process he used to incorporate this feeling of being drowned in the invasion of Middle Earth by Mordor.  He also worked this into many of his motifs: the drowning of Isengard, the dead marshes, and Sam Gamgee’s near drowning when following Frodo.  I use dreams to inspire me as well.  I won’t go into the dream I had that inspired my latest novel (for it is more of a nightmare) but I will say that the dreams we have can give us great stories to tell.

8.  Real People Make Great Characters – Tolkien: “There was a curious local character, an old man who used to go about sweeping gossip and weather-wisdom and such like.  To amuse my boys I named him Gaffer Gamgee, and the name became part of family lore to fix on old chaps of the kind.  At that time I was beginning on The Hobbit.  The choice of Gamgee was primarily directed by alliteration; but I did not invent it.  It was caught out of childhood memory, as a comic word or name.  It was in fact the name when I was small (in Birmingham) for ‘cotton-wool'”(348).  Tolkien drew from real life people to populate the amazing world of Middle Earth.  Look around you.  Many of the people you spend time with every day may make fantastic characters in your novel.  It is fun to imagine them as heroes or what they would really do if a situation presented itself like the peril that is in my current offering.  Many of the people who litter the post-apocalyptic landscape of my novel are based on real people.  Truth is indeed stranger than fiction.

9.  You May Be the Next Best Selling Author – Tolkien relates the following story: “I lived for a while in a rather decayed road (aptly called Duchess) in Edgbaston, B’ham; it ran into a more decayed road called Beaufort.  I mention this only because in Beaufort road was a house, occupied in its palmier days, by Mr. Shorthouse, a manufacturer of acids, of (I believe) Quaker connections.  He, a mere amateur (like myself) with no status in the literary world, suddenly produced a long book, which was queer, exciting, and debatable – or seemed so then, few now find it possible to read.  It slowly took on, and eventually became a best-seller, and the subject of public discussion from the Prime Minister downwards.  This was John Inglesant.  Mr. Shorthouse became very queer, and very UnBrummagem not to say UnEnglish.  He seemed to fancy himself as a reincarnation of some renaissance Italian, and dressed the part” (348).  Tolkien adds, again, the words in parenthesis like myself which connote that he is highly critical of his own writing.  He was surprised by the success of his first book and also of the others.  He felt, literally, that his best-selling nature was a complete accident.  This gives all writers hope, but know that he did not achieve his status without following many of the tips listed in this post.

10.  Books You Write May Seem Trite – Tolkien writes: “I now find The Lord of the Rings ‘good in parts'”(349).  This is to say that upon reading his books years after writing them his writing experience informs him that he is a much better writer than when he published The Hobbit.  You may feel that way about books you have written.  I have several I would like to go back and revisit now that I know more about the process.  This is perfectly fine.  I revised The Transgression Box and uploaded the new copy to Kindle and Nook, and this was after it had been out as a print edition for a year.

All quotations are taken from the following text: