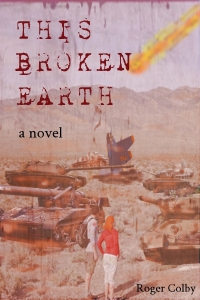 One year ago today I released the first part of my post-apocalyptic novel about faith, This Broken Earth on several digital outlets. All three books as one compendium is available for .99 cents on Kindle, Nook, and iBooks. It has been a year of experiments, small successes, and hard lessons learned.

When I originally released it, I was actually working on books 2 and 3 of the novel, and then released them on October 31st and then on December 21st. I was experimenting with what Hugh Howey had done with his Wool series. I offered the first part of the book for free on Smashwords, and then hoped and prayed that people would find it through this blog and through my other myriad of social media.

Well, it worked pretty well. People were indeed finding it. I listed it on several “free e-book” listing sites, and it was downloaded…to date over 770 times. I wish I had actually sold that many, but we live and learn. I have actually sold (all other digital outlets) 180 copies in one year’s time. Not bad for no ad space purchased.

I have garnered some pretty good reviews, too, from people I don’t even know (save one who I know is my mom) so four good reviews. <grin> What I’m finding out is that people who don’t usually read “this kind of thing” really dig it, and can’t put it down. That’s a testament to really hard work as a writer. I spent three weeks on the opening line alone, and the decision to write the novel in first person omniscient was not an accident. Each reader finds a voice they like.

I currently have an Indiegogo campaign going to fund the book to a print edition, but I am beginning to think that it is a failed experiment. If it doesn’t get funded, I’m not going to cry about it. All of these things are experiments for my next book which will be entered in the Amazon Breakout Novelist Competition in January. After that, I’ll take the lessons learned from This Broken Earth and apply them.

What do I have planned for This Broken Earth at this point? Well, I think I’ll offer it for free (for 5 days only) on Kindle after the Indiegogo campaign is over. Until then it will be offered for .99 cents on all three of the big e-book sellers. When it goes up for free on Kindle, I will take down the other two versions to participate in Kindle Select for the first 90 days, then put up all the other versions again. After that, it will be $2.99, and I will move on to other projects.

There comes a time when one must let go of that baby and watch it totter off to make it’s own history. And by the way, this is also my 500th post to this blog!