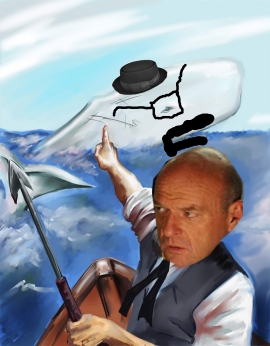 Breaking Bad has finally ended after five seasons and I for one am a little sad.  I missed watching mild mannered Walter White become the dreaded Heisenberg, essentially going from Mr. Chips to Scarface in the matter of a few years time.

Read no further if you have not seen it.  Spoilers ahead.

I wrote a blog post a while back about Breaking Bad‘s connection to Shakespeare’s Macbeth, driven home in the final season by a line Walt says when thinking about going into town from his safe house (Tomorrow…Tomorrow), but after finishing the series, I think there is an even greater allusion to Herman Melville’s Moby Dick.

Here are my comparisons:

I do not think that these comparisons are too vague to be conjecture.  They are very strong, and if one looks deeper, one can see that this allusion to Moby Dick is running throughout at least the fourth and fifth season.  Hank’s obsession for Heisenberg is beyond the need to catch the bad guy.  It is just like Ahab’s.

2 thoughts on “Hank and Walt: An Allusion to Ahab and Moby Dick”