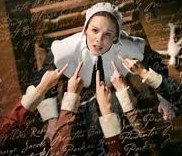 It’s that time of year again!  The daily temperatures are falling, the leaves are turning various shades of orange and various chintzy costumes are for sale at Wal-Mart.

No, I’m not describing Halloween.  I’m describing the time of year that I usually teach Arthur Miller’s The Crucible, that time honored play about the Salem witch trials loosely veiled as a commentary on McCarthyism.

I love this play.  Yes, it’s depressing and sad, and we all choke up at the end when John Proctor won’t sign the confession which would blacken his name in the village…”Because it is my na-a-a-a-ame!” But I love it because it is a masterful piece of storytelling and characterization.

I have selected five things that Miller does in the play that we could all learn to use in our own writing, whether that be long form novel writing or play writing or screenplay writing.

Tomorrow I’ll pop in the film starring Daniel Day Lewis and Winona Rider, the version overseen completely by Miller before he died, the one that is considered to be his most complete telling of the story.  Afterward we will study the play and dig into the rich text of this famous American drama.  Until then, I plan on incorporating some of these techniques and strategies into my latest WIP.  I hope that you can use them as well.