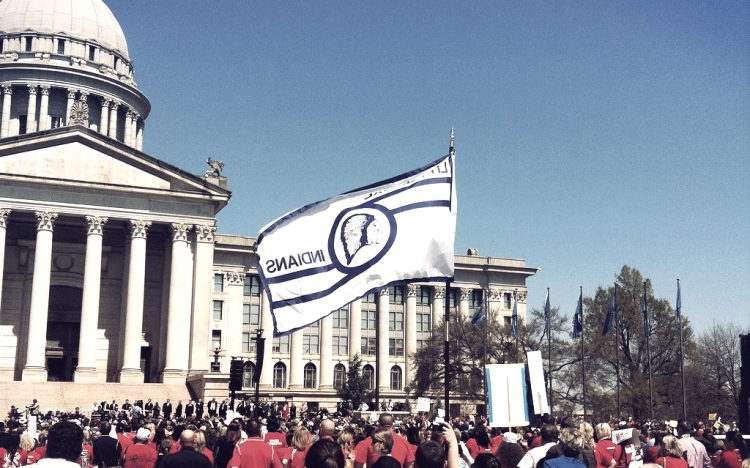 Yesterday I attended what is becoming an annual event in my state: the Oklahoma Education Rally.  I made several signs, but in the end I didn’t take them, choosing to go with my friend Michael Dean (featured on this week’s podcast) as he talked to our representatives, and then live tweet the entire experience.  I didn’t bring the signs because my wife felt that they were a bit too obnoxious, but I was able to release anger on the signs before going to the rally to be civil.

We arrived at the capitol building early, walking through a side entrance, through metal detectors, and then into the marble hallways filled with educators and various political entities either handing out water and snacks or pamphlets.

Again we were at the capitol because of many policies that have not changed in Oklahoma regarding education.  Our state is facing much legislation akin to the kind of legislation so screamed about in Indiana, but we don’t get the press like that state (even though Rep. Sally Kern made the news with her ant-gay bills).  The Republican party has controlled the state for some time, and because they continually write bills that seem to be against public education.

The legislature has also funneled over $10 million in public ed funds to online charter schools that are dodgy at best, as this article clearly explains.

It seems that the Republican party, a party that screams shrilly about limiting government is perfectly fine with sticking its nose into issues it sees as something to be micro-managed, namely education.

Just so we’re clear, I have to say that I am not a Republican or a Democrat, but am registered independent.

Well…on to my experience today, because I think it bears some thought.  If you support public ed, you had better hope this kind of legislative steamroller doesn’t come to your state…or maybe it already has.  I will explain.

We first climbed the stairs to Senator Rob Standridge’s (R) office where Michael had a 10:30 meeting.  We entered the office where his secretary ushered us in, and Senator Standridge was very cordial and polite, making us feel at ease as we spoke to him.  We offered our concerns about school funding, about high stakes testing, and about the general morale of the education community which is dismal at best.  He began to explain to us that the state has a $616 million dollar shortfall, and because of this hard choices have to be made.  Basically he didn’t give us any answers, blaming the problems on “paying back a loan from Devon Energy”.  The main ray of hope was that he supported getting rid of high stakes testing in favor of using the ACT as a gauge.  However, about the budget, the state of Minnesota, when given a huge revenue increase due to an oil boom, increased their education budget to the tune of $344 million, while this same legislature when given the same circumstances a few years ago, chose to cut education by the same amount.

The second legislator we visited was Representative Josh Cockroft (R), who when we arrived was speaking to a group of teachers and administrators from Moore.  These professionals were telling Rep. Cockroft about the recent damage to their district from yet another tornado.  During the conversation (which turned to testing), Rep. Cockroft said that he would support getting rid of end of instruction testing for the ACT because no college recognized the EOI’s, and it was a waste of money (over $71 million).  When Mr. Dean asked him (point blank) if he meant what he said, Rep. Cockroft said that he would support any measure to do so “in a heartbeat”.  I appreciate this if it is true, but we will hold him to his word.  Recently, Rep. Cockroft sponsored the bill mentioned above regarding teacher payroll deductions.

The third legislator we visited was the minority leader Representative Ben Sherrer (D) who was happy to see us, dressed in an impeccable checker pin stripe suit.  We talked for some time about education.  He agreed with all of our ideas (and we had several chuckles about the state of things) but he told us that the majority body of our state government wants to privatize education (even though they won’t publicly state this) and the bills that they have introduced are the proof.

You should have heard the frustration in his voice.

Rep. Sherrer said later in his speech to the teachers, administrators, parents and students on the capitol steps that as soon as the port-o-potties were being hauled away from last year’s rally, the legislators of this body were voting against our concerns with zeal.

And the people of Oklahoma voted every one of them back into office.

I can’t really say if anything said to us in the capitol will amount to anything in the days to come.  I can’t say that our legislators heard our cries of angst and decided to overturn or defeat any of the bills (some of them already on the governor’s desk).  I do know that we did our best, but none of this will matter if we don’t vote accordingly.  Teachers across the state have to stop voting for these candidates that do not support public education.  It’s like the abused wife who continually goes back to her husband saying “Oh I’m sure he loves me.  He’s a God fearing man after all.”

If we vote as one, we can overturn this mismanagement.

It’s not about Republican or Democrat.  It’s about what is right for our children.  I have four of them whose future rides on a public education.  I certainly can’t afford a private school on my salary, and a charter school may not take my special educated son.  Let’s hope the people of Oklahoma (and dare I say it…teachters) will wake up and stop drinking the cool-aid.

2 thoughts on “Oklahoma Education Rally: Were We Heard?”