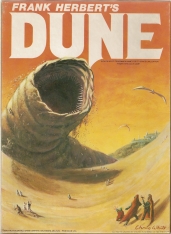 I finished reading Dune by Frank Herbert, and as a first time reader of the series (Yeah.  I know.  Where’ve you been?) I was amazed by the deep philosophical nature of the book.  More than that, though, as I have been posting on this blog, old Frank Herbert has many tips to teach us about the writing process.

Duke Paul Atreides, Muad’Dib to the Fremen, the Kwisats Haderach to the galaxy is undoubtedly the hero of the first several books.  However, Herbert does something with this hero that is quite interesting and unique.

He’s kind of a jerk.

The character of Liet-Kynes, who lay dying in the desert, put it best: “No more terrible disaster could befall your people that for them to fall into the hands of a Hero.”

What if the hero of the novel isn’t that benevolent?  What if every time he does some grand deed, good or bad, he says to his public: “I am the Kwisatz Haderach.  That is reason enough.”?  This is a very complex issue to explore for a hero, and if we want to trip up our readers, have them follow and root for a hero throughout a text only to turn the hero into a power-mad dictator.

This technique works in film as well, for one only has to watch Alfred Hitchcock’s Psycho to see it play out.  We root for young Norman to get away with covering up his mother’s murders, but in the end we are appalled when we find out that he was the murderer all along.

It’s worth a thought.  I’ve considered sending the hero of my latest novel to the dark side several times, and after reading Dune and beginning Dune Messiah, I have decided that it couldn’t hurt to let him dabble in it even if it is a way for me to bring depth to a character who can ultimately be redeemed.