I am in the uphill struggle to finish the final book in the Five Rims series, and as the kids say, the struggle is real.  I have been bombarded with so many new ideas for novels that it has become that much more difficult to finish the current novel because I want to move on with other projects.

I suppose this is a good problem (as several writers struggle to come up with new ideas) but if my heart and soul isn’t in the current project then my readers won’t care about it.  I have to care about it, so I’m really trying to care.

As I have stated before, I won’t be doing another series, and I’ve pushed the other ideas over to reams of notebook paper in order to finish the current book.

But as any good writer, I’m reading a lot of other books.

I read the first book in the “EX” series by Peter Clines.  Great book.  The premise is a world where there are superheroes sort of like DC or Marvel’s universe, but the world is over-run with a zombie apocalypse. Many of the heroes are unharmed (and cannot be harmed) by the zombie virus, and are leading humanity in a quest of survival.

I also am currently reading “The Book of Strange New Things” by Michel Faber, a Dutch author who not only is a best-selling author but an multi award-winning author as well.  His novels are genre bending, and they tend to reach to the heart of good storytelling with realistic characters and high-minded plot-lines. 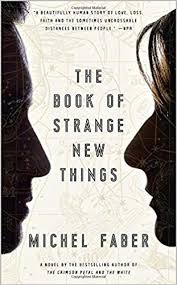 “The Book of Strange New Things” is a novel about an evangelical Christian pastor who is charged with taking a mission journey away from his wife to an alien planet where a human colony is being created.  He finds a congregation of alien creatures, and prospers by spreading the gospel of Christ to them, but his wife is stuck back home on an earth being ravaged by the inevitable result of global warming.  It is a book about faith and relationships, the backdrop being an interesting science-fiction story.

Both of these novels have given me inspiration for new stories, but I am now thinking carefully about the next novel, mainly what type of story I am going to tell.  My current series is a swashbuckling adventure story in space without much deep symbolism or thematic message.  Sure, the world needs great adventure stories, but I’ve always wanted to write something meaningful, something that would resonate on a more social or political landscape.

This is why I’m thinking very carefully about my next project.  Originally I wanted to tell a story of a young man who develops super powers, is whisked away by another superhuman, only to find out that the earth is protected by a secret society of super heroes.  It could turn political, or it could be a commentary on American Christianity in a veiled allegorical way.

It might be “Ex-Heroes”-worthy, but not “The Book of Strange New Things”-worthy.  I want it to be closer to the latter.  I may have to scrap the idea entirely, but my point is that if you are considering a new project, rather than write yet another vampire story, why don’t you consider being original and saying something within your text that speaks to some heavy social issue?

I’m thinking very carefully about the next book, and hopefully I can give back to my fellow man, take a stand about something that really sets my head on fire, hopefully make people think.

In the end, that will be a better offering from this writer than just another adventure story.

3 thoughts on “Think Carefully About Your New WIP”